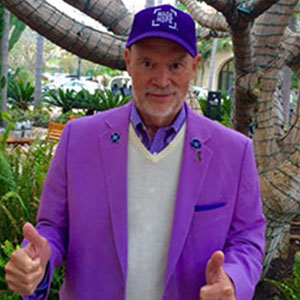 Meet Larry Clark, a tenacious survivor who has battled nine recurrences of pancreatic cancer since being diagnosed in 2013. What’s his secret to beating his aggressive Stage IV disease? A “dream team” of doctors, multiple clinical trials and an undeniable fighting spirit.

Editor’s note: Larry Clark passed away in May 2018, but his legacy lives on through his profound impact on the pancreatic cancer community. We hope his story, shared here, inspires others to Demand Better for everyone affected by pancreatic cancer.

As a nearly four-year pancreatic cancer survivor who has battled nine recurrences of the disease, retired Mayor Larry Clark is a beacon of hope to others facing the disease.

His approach to managing an aggressive stage IV disease is to stay informed about available treatment options. He even has Google Alerts set to tell him about treatment advances and other research findings to help him be as proactive and knowledgeable as possible.

Larry also has a treatment strategy. “I always have an idea of what treatment may work next in case the current one doesn’t. For most people with this disease, it’s not a one-and-done type situation. I always have backup plans A, B and C.”

Clinical trials are an important part of his strategy. “I can’t stress enough how important it is to consider clinical trials as part of pancreatic cancer treatment. It’s one major reason why I’m alive and doing well today, along with excellent care from Dr. Nicholas Nissen and my ‘Dream Team’ of specialists.” Larry has participated in two trials. He believes one trial strengthened his immune system and kept his cancer from recurring for one year.

His message for patients considering clinical trials is powerful: “Do not be fearful. The most advanced treatment protocols and opportunities to help are found in clinical trials. What do you have to lose?” Larry wants others battling the disease to know, “You can survive this disease, but first you need to believe you can survive, and you must have the best medical support you can get. Never give up. Believe you can beat this disease and never give up.”

We’re here to help. Contact a Patient Central Associate for in-depth details about clinical trials and to get your questions answered. Associates are available Monday Friday, 7 a.m. to 5 p.m. Pacific Time. Larry advocates that “All of us must join the fight to fund critically needed research that is vital … to make pancreatic cancer a manageable disease.” This is why he serves as Honorary Co-Chair and fundraises for PurpleStride Los Angeles. 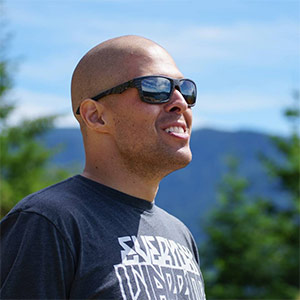 From the moment that 29-year-old Xan Harwood-Karlik was diagnosed with pancreatic cancer, he knew he needed to be his own health advocate. Learn more about Xan, personalized medicine and the art of staying active during pancreatic cancer treatment.

In November 2014, 29-year-old Xan Harwood-Karlik of Portland, Ore., was diagnosed with stage 3 pancreatic cancer. He immediately started a rigorous treatment program involving aggressive chemotherapy, immunotherapy clinical trials, radiation, major surgery and then more chemotherapy. Initial results were extremely promising, but a year after diagnosis, his healthcare team confirmed a recurrence of the disease in his liver, reclassifying the diagnosis to stage 4.

Xan and his healthcare team needed to make some quick decisions about his next treatment. He was grateful to have participated in Know Your Tumor several months earlier because the service gave him the information he needed to immediately make this next treatment decision. The Know Your Tumor personalized medicine service provides eligible pancreatic cancer patients and their oncologists with information about the biology of their tumor and personalized treatment options, including appropriate clinical trials.

The best news: the treatment is working. Xan shared, “The tumors have shrunk dramatically and I’m tolerating treatments remarkably. I still have more progress to make, but I have a shot at survival because of Know Your Tumor.”

Xan has stayed strong throughout treatment, participating in CrossFit and continuing to hang glide. He has also gotten involved with our organization through PurpleStride, our signature walk/run event, by helping raise funds for his team, Yes We Xan. These funds support the very programs that have helped Xan. The team is currently the top fundraising team of all PurpleStride events nationwide and recently hit their $50,000 fundraising goal! We are especially grateful for this support, because this is how we reach more people like Xan and improve the lives of countless others.

“Since last year’s PurpleStride Portland, we’ve lost three of the top five fundraisers to pancreatic cancer,” Xan said. “I met all of them that day, and I carry their torch from where they fell. I need everyone’s help to ensure that more people succeed in this fight, because right now far too many people are losing it.”

Xan and his wife, Sara, had their first child last October. He is thankful that his treatment is grateful to have been able to meet his son.

“I’ve made it this far in my fight by equipping myself with as much relevant information to my specific case as I can, and the Know Your Tumor service fit squarely into that schema for me,” Xan explained. “Having that test information let me make a snap decision in a very emotional and scary meeting. Without knowing exactly what treatment to start on right away, my chances of actually meeting my son were in jeopardy.”

For more information about Know Your Tumor, contact Patient Central.

Take a look at this video showcasing Xan’s strength, shot just before his surgery in May 2015. 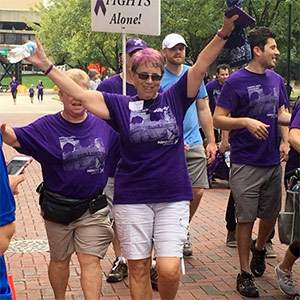 This two-time cancer survivor has one goal: to make purple the new pink. Read more about Cathy’s battles with breast cancer and pancreatic cancer, and her determination to bring the nation’s deadliest major cancer out of the shadows.

Beating cancer is no easy feat. For Cathy Schwandt of Columbus, Ohio, that is especially true. She is a two-time cancer survivor: first breast cancer and then, many years later, pancreatic cancer. She knows very well the importance of never giving up. She’s also made it her mission, through her volunteer work, to help fellow survivors continue to keep fighting back.

She was diagnosed with breast cancer in 1980 at only 28 years old. Not a lot was known about the disease back then.

“I was young, and I didn’t fully understand how serious it was,” Cathy said. “Thankfully, the cancer was totally removed and required no chemotherapy. When I was among other survivors, it was hard to fathom what they went through. I had survivor’s guilt. I felt my road was too easy, I had never considered a bad outcome.”

But when Cathy was diagnosed with pancreatic cancer in 2013, her outlook on cancer changed.

“This diagnosis hit me much harder because pancreatic cancer had been my biggest fear. I always thought, ‘That’s the one cancer I never want to get’ because of the low survival rate. And unfortunately, I got it.”

But she said the diagnosis also drove home the importance of doing what she could to create awareness because pancreatic cancer is still in the shadows, like breast cancer once was, but it doesn’t have to be that way.

“After going through breast cancer, and seeing the progress their community has made, I realized that I needed to join the fight to create more awareness for pancreatic cancer.”

Cathy got involved with the Pancreatic Cancer Action Network as a volunteer with the Columbus, OH Affiliate. After meeting fellow survivors who had faced the same fears she had, she wanted to do more to help others in a similar situation. She soon became the Community Engagement Chair, a volunteer leadership role that works closely with local pancreatic cancer survivors and their families.

She is also a member of our newly founded Survivor Council, which ensures the survivors’ voice, experience and expertise are integrated into the Pancreatic Cancer Action Network’s programs and initiatives.

“I want to help people going through what I went through, to raise awareness and to advocate for change. I want to educate people about this disease so if it happens to them or someone they know, they won’t be blindsided like most of us were in the beginning.”

“In my speech, I emphasized that we are at the point with pancreatic cancer now that we were with breast cancer when I was diagnosed with that disease over 30 years ago. We need to continue fighting and pushing forward with more intensity as well as invest in more research that will increase survival. We need more purple shirts. Let’s make purple the new pink!”

“That’s certainly a mission for me, and I’m proud to be here, healthy and able to do just that.”