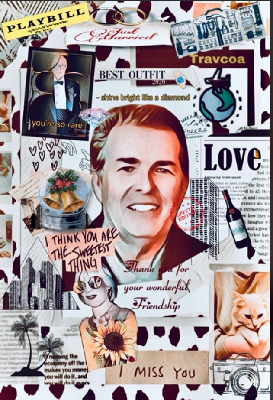 You may be aware that my very beloved partner and spouse for 34 years recently passed away. Warren Paul Kendrick-Richard was only 59 years old, and appeared to be in excellent condition.

From the time he was 16, he never stopped working, and finally late last year he decided to retire and enjoy our beautiful new home. He had so many plans and projects to do at our house. He also wanted to indulge in his passion of gourmet cooking. A month after his decision to retire, he was diagnosed with pancreatic cancer, stage four. We immediately went to Sloan Kettering Hospital in New York City for treatment. I became his 24/7 caregiver for nine months.

Warren was a wonderful patient, never complaining, and always looking at the positive side of every situation. We both knew how terrible pancreatic cancer is, but we were at the best place, and we hoped he could be kept going.

Warren was loved by everyone who met him. All the folks who took care of him, especially at the hospital, really loved him, and did everything possible to help him. His illness was one the worst diseases, and his physical deterioration was heartbreaking, but that never stopped his incredible mind from keeping active.

During the last two weeks he was with us, he wrote his life story. His wish was that not a word of his story be changed, and it be published after he was gone. Please help me to fulfill his final wish, by reading what motivated him, and joining us in our crusade to help others still suffering from this horrible disease. Doing nothing is not an option for those facing this disease - patients or their families and friends - now or in the future.

Please pass this message on to your friends, and ask them to do the same. Warren was the light of my life, my best friend, and I miss him tremendously. I hope you will do whatever you can - large or small - to fulfill his most important final wish. Please accept my grateful thanks and very kind regards.    Ed Richard

Hello everyone.  I quickly realized that many of you have left Facebook or know me through Ed. For that reason, I put this story of my life together.

First of all, I want to say that I have lived an extraordinary life which I attribute mostly to Ed. He has been a constant positive force in my life for almost 35 years. Ed and my extended family (Grant, Cindy and the kids) have always been by my side and have never wavered in support for me. When I have fallen, they have always been there to catch me.

I grew up in Seattle. When I lived there nobody really paid much attention to Seattle, much less to Washington state. Looking back, I have such fond memories of my days of riding motorcycles, the family cabin, and late night evenings around the campfire. As it turned out, by the age of 17, I was kicked out of my house since I could not afford the rent my parents demanded. It’s funny, as I look back, that most kids had parents who took care of them and protected them. Mine were, sadly, just the opposite. It was my friends, and finally my soul mate, Ed, who helped and protected me, almost like substitute parents. I was told to leave my car keys since my parents had paid for part of it. At that time, I found myself with a garbage bag of clothing, walking to the nearest bus stop.  I was never brought up with any social skills so this was a time when I went through a lot of mental anguish. This was also the time where my biggest regrets come from.

I saved some money and bought a truck with a canopy. This was my home for the next 5 months. I was a member of a sports club so I was able to take a shower in the morning before heading to work.

Somehow I was blessed enough to have good friends who stepped up to help. When all was done I had my first job at McDonalds and $300 in my checking account.

I was promoted a few times at work, became a store manager then landed a job with Greyhound Food Management. At the time it was a huge conglomerate of food companies. It was dismantled sometime in the 80's. I met Ed in 1988 and ran one of his industrial companies for about 10 years. I was hired to set-up a computer system, found serious irregularities among top employees, and Ed made me the manager. We sold it and that is when I started my software consulting company. I built up the company and sold it in 2009-2010. It was exciting to start a company from scratch, make it successful, and then sell it for a nice sum.

We then decided to move to Florida. I also decided to retire. After a year or two, we formed a real estate company that bought, sold and managed rental apartment buildings. We eventually owned ten buildings, and I was a “one-person show”, managing, designing rehabs, doing all sorts of work, gardener, complaint department, kitchen designer and builder. I built more than 20 kitchens from scratch. You name it, I did it! It was exciting, stimulating and successful for the three of us (me, Ed and his son Grant) who were partners. I thought of the name Lucky Duck Properties LLC, because it was so different, and folks loved it.

I was going to also be Ed's caregiver and eventually manage the Edward H Richard Charitable Foundation which he had started in 1969 with $800.00. I had also started managing the foundation, and really liked it. I helped Ed build the foundation from a worth of $800, to one worth more than eight million dollars, and we also gave away more than four million dollars in gifts.

Two years ago, we bought a wonderful house with a magnificent pool in a beautiful setting in Delray Beach, Florida. I loved it, and in mid-2019, I decided the time had come for me to retire and enjoy my new life upgrading our new home, and traveling with Ed, who did not have that many more years of very active time ahead. We were heading for great times, until I was diagnosed with stage 4 pancreatic cancer. My dreams came crashing down. To make a long story shorter, my doctor called for some unorthodox tests and I was diagnosed with the worst type of cancer. The disease is incurable and difficult to detect. There is in fact no early warning test available.

I have been fighting this terrible cancer for almost nine months now, but things are not looking very good.

I encourage everyone to read a few articles about the subject. It might save you or a loved one.

I do also ask if you have any contact with my immediate family, please DO NOT disclose any of this story to them. They don’t care about me and are just a bunch of leeches.

Thank you all for your love and friendship.

I decided when the Facebook donation program was launched that I would also put money where my mouth was. I promised to match ANY donation up to $3000. As it turned out, we raised almost $5000.00 in just two weeks. Now, I feel I am in the final stage of my life. I’m not complaining, though I wish I had a bit more time.

Repeating myself, I have had a great life with people like Ed and his family who became my family and really, really love me, as much as I love them. Ed and his family have made my time on earth very great. I also have the most wonderful friends who are too numerous to mention. But, you know who you are, and always remember that I love you and am so thankful for your many kindnesses to me.

Thanks for your friendship. I have had an extraordinary life, met some amazing people, have a great adopted family whose name I now proudly bear and have been blessed with falling in love several times. I am also so happy and pleased that Ed and I married earlier this year as some of you know, so I decided to go by the name Warren P. Kendrick-Richard to show how much I love MY Richard family.

Now, I must ask you to help not only me, but the many thousands of people who are suffering and dying from pancreatic cancer.

Ed and I have talked at length about what is happening to me, and we have decided to establish the WARREN P. KENDRICK-RICHARD MEMORIAL FUND as a permanent fund. The fund is not only about remembering me, and I thank you in advance for doing that, but it will help find a cure for this deadliest form of cancer. In the very little bit of time I have left, I am using my diminishing strength to ask for your help and support. To those of you who have given already, my most grateful thanks. If you find it possible to give a bit more that would be great. However, if you cannot give, please pass on the story of my life to your family and friends. To folks who would like to donate, I may not be able to thank you personally, but please know how much your gifts mean to me.

Ed will match ALL gifts up to many thousands of dollars. I have instructed that my estate also do the same, which will mean that your one gift will be multiplied by three. Just imagine the lives that may be saved!

I thank you, and love you all for being my friend through thick and thin!

With lots of love and many good wishes,