Purple Purpose for Peter, for my father 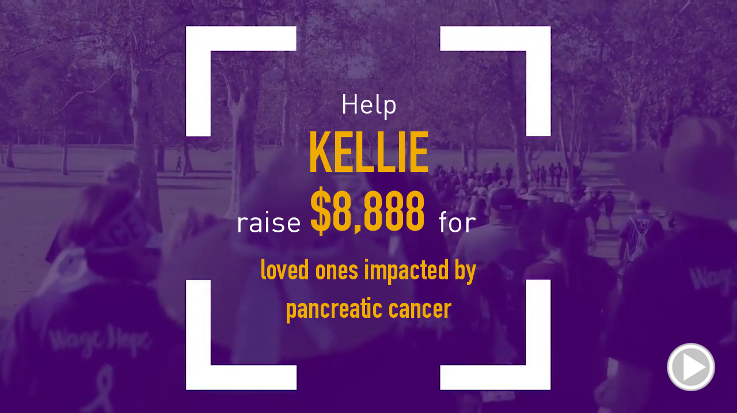 Donate Donate to Kellie
SHARE MY VIDEO:
Thank you for stopping by. I am raising money in support of the Pancreatic Cancer Action Network by participating in PurpleStride San Diego on 10/25 for their 10 year anniversary. This organization is important to me as I lost my father in 2007 to Pancreatic Cancer. He was only 59 years young, a very healthy and active man and had just celebrated 30 years of marriage to my mom when we received the news. He lived 8 short months after being diagnosed with this awful disease. He was my mentor, hero and friend, and I miss him dearly.

I am participating to keep his memory alive, create awareness about the disease and raise money for this most under-funded cancer. I would be very grateful if you would:


A little more about my story:

A few months after we lost my dad in 2007 I ran the Chicago Marathon in his memory and honor. I started marathon training and fundraising for PanCAN when he passed in June for the October race. I am from Chicago and was living in Boston at the time and I hosted many fundraising events for the race and cause.

I flew back to Chicago to run in October and it was 95F on race day, I had to go out and buy a different outfit the night before. The energy at the race was so inspiring, my shirt had my name and my dad's name and people would call it out all along the way. It brought tears to my eyes, I felt like I had an angel by my side. Halfway through the race when I was at mile 13 they decided to send everyone back to the start line since it was too hot and they didn't want people to suffer heat stroke or exhaustion/dehydration due to the race. When I heard this I was horrified, I had not come from Boston, back home to Chicago to run for my dad and awareness to go back to Boston and say I didn't finished the race! I couldn't stop yet, I couldn't just give up at mile 13. After my cousin ran a few miles with me, I ran around the barricade, past mile 13 as I could see some runners ahead and had driven the route the night before. Then my brother jumped in and ran with me and it was mayhem. There were helicopters overhead, hydrants flooding the streets, police on megaphone asking people to stop running and people were handing out ice and popsicles to the runners, it was crazy. My feet were soaked and felt like lead but I ran across that finish line six hours and five minutes after I started (yikes) and was greeted by my mom, sister and the rest of my family. It was a touching and amazing day that I know my dad was along for every stride of the way.

In 2017 on the 10 year anniversary of the passing of my father, I am proud to say I stood on stage as the number one fundraiser for Purple Stride San Diego 2017 walking with a huge team of over 30 people.

What an honor to celebrate the 10 year anniversary of my father's passing while on stage having raised over 14k for this disease in 2017 and over 50k since his passing in 2007. That same day my brother was back in Chicago running the Chicago marathon for my dad.

It's a blessing to be able to be in service, to fight for this disease and support those who need our help.

This fight is a team effort and thank you for continuing to support our cause. We need you!

Some chilling facts about Pancreatic Cancer:
* It is estimated that more than 56,770 Americans will be diagnosed with pancreatic cancer this year, and more than 45,750 will die from the disease.
* It is the THIRD (soon to be second) leading cause of cancer death, with a five-year survival rate of just 9%. Pancreatic cancer has the lowest relative survival rate of any major cancer.
* Pancreatic cancer is the most under-funded, under-recognized and least-studied of all major cancer killers with only two percent of the National Cancer Institute's annual budget dedicated to pancreatic cancer research.
* Steve Jobs, Patrick Swayze, Michael Landon, Luciano Pavarotti and Randy Pausch are a few celebrities who have lost their battle with Pancreatic Cancer.

Join my team Donate to Kellie