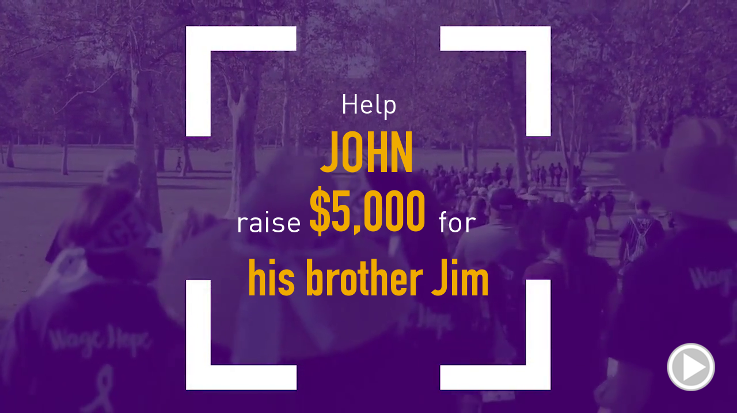 Like many others my involvement with PanCAN began with the loss of a loved one. My brother Jim, just 3 days after his 60th birthday and only 27 days after his diagnosis, passed away from pancreatic cancer on February 12, 2015. To say Jim and I were close probably doesn’t do our relationship justice. Jim and I had either lived under the same roof or within 3 blocks of each other for nearly our entire lives. My wife Julie and Jim’s wife Lisa were even best friends before we met them.

During Jim’s last few days, there were a couple of thoughts that I could not shake. One was the thought I had failed my brother by letting the hopelessness of his diagnosis overcome me to the point I hadn’t sought out more information on possible treatments or care. The second thought was that Jim’s passing would not be the last time my family heard from pancreatic cancer.

After Jim passed I promised myself that if pancreatic cancer ever did make another unwelcomed appearance in our family that it wouldn’t be because I hadn’t tried to make a difference. I began to search on the Internet for somewhere to focus my efforts and as soon as I saw the WAGE HOPE logo on the PanCAN website, I knew that I had found the place for me.

In the 5 years that Team Big Jim has taken part in PurpleStride Washington, DC we have raised over $61,000.  Unfortunately our efforts thus far have not kept pancreatic cancer from entering our lives again.  In the years since Jim’s passing we have lost an uncle, a couple of friends, and just this past July my daughter-in-law lost her father to pancreatic cancer.

The recurrence of the disease in our family’s lives has not broken our will to fight. Instead we take solace in knowing that the progress PanCAN is making in awareness, research, and treatments has helped those we love and everyone impacted by the disease.

Join my team Donate to John