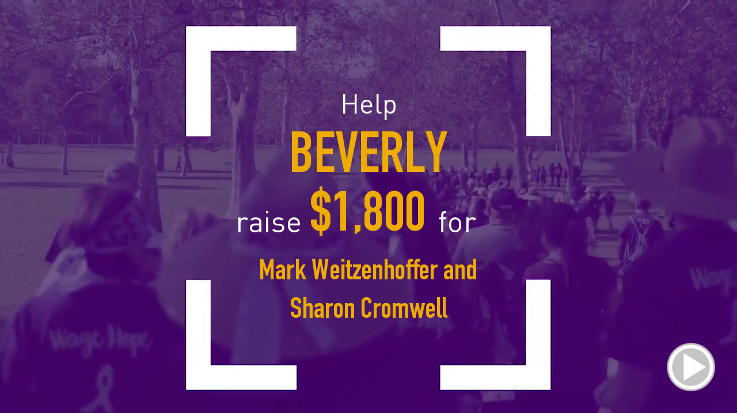 Donate Donate to Beverly
SHARE MY VIDEO:
I'm raising money in support of the Pancreatic Cancer Action Network by participating in PurpleStride DFW.

In years past, I have participated in memory of my late husband, Mark Weitzenhoffer. Now, I also stride in memory of my sister, Sharon Cromwell, who died in January 2016, just short of a year after her pancreatic cancer diagnosis.

Mark & I were together from the age of 15. We were married 37+ years and raised two sons together. Mark was often bigger than life in many aspects of his life. He was a father, to David & Wes, and brother to Janet. He was my husband and, as cliche as it sounds, truly my best friend. He was smart and funny and playful. He could be intense on one hand and seriously playful on the other. When he worked, he was all in and did the best job he could - at the FAA, as a pilot, as an accountant, as a security guard, in the Air Force, as a projectionist, a pizza restaurant manager, a janitor, soda jerk, and a paperboy. It was the same when he played - hot air ballooning, flying gliders, coaching soccer (badly) or refereeing basketball, enjoying his HAM radio hobby, SCUBA diving, RV-ing, star-gazing. And when he volunteered - as a school board president, president of an amateur radio, Church treasurer and Sunday School Teacher, president of a diving club, organizing an Emergency Response Network with the City, the list is long... He had great friendships and left his mark everywhere he went. He had a great laugh. Often, he would laugh so hard that people around him would laugh simply at his laughter, having no clue themselves what had been so funny. For many of us, he left his footprints on our hearts.

Sharon, was my sister, and an identical twin to Karen, sister to Randy, Roilyn, Diana, Beverly and Betty. Wife to Richard, mother to Alicia and her greatest joy, grandmother (she hated that term but loved being one) to Hayden. She was a long time manager of a tax preparation office in her home town of El Reno, OK. She loved holidays, especially Christmas. She was considered a great resource for all things by family and friends. She had a wicked sense of humor and always managed to have a good time.

Pancreatic cancer has surpassed breast cancer, becoming the third leading cause of cancer deaths in American. It is expected to surpass colon cancer within the next year to become the second leading cause of cancer deaths in our country. Pancreatic cancer has only an 9% five-year survival rate, making it the deadliest of the major cancers. This year, every single day, 128 Americans will die of pancreatic cancer. This figure has grown each year since Mark died in 2009. These statistics are simply unacceptable.

Research is making some headway, but the process is slow and the funding levels are far too low. We know that research follows dollars and from research comes better treatments, early detection, pre-screening tests, and eventually, a cure.

By making a donation to me, you are supporting efforts to double survival for this deadly disease by 2020.

Please make a donation today and help me to reach my fundraising goal! I WAGE HOPE in memory of Mark & Sharon. Together we can make the impossible possible.
Join my team Donate to Beverly