Welcome to My Page 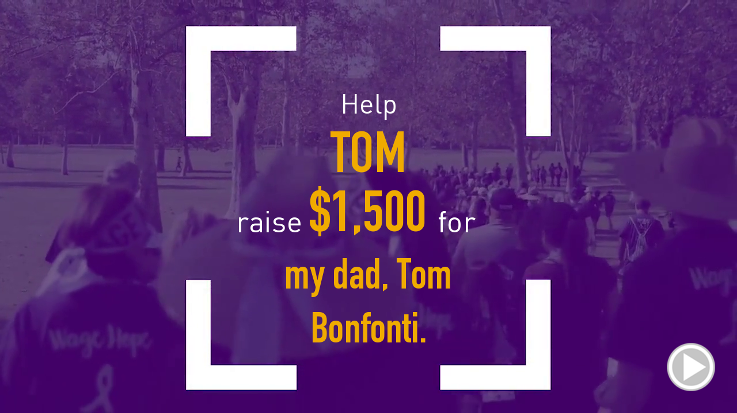 We will be working, once again, to raise money in honor of our loved one Tom Bonfonti. We do this to honor him in the best way possible, but also with the goal of raising money, so that others may never have to experience the loss of a loved one to this horrible disease.

Watching a loved one fight against cancer (of any form) is a club that no one asks to join, and no one wants to be in. For us, we watched our Dad, husband, brother, Uncle, and friend, fight this horrible disease for over a year. We watched as he went through surgery, chemo, and radiation, with a fight that made us all proud.  He fought to meet, and hold, his granddaughter...which he did. He fought for birthdays, for one more Christmas, and for all the little moments that filled each of his days. Tom fought for his life every single day that he battled this disease.

With an incredible outcome after surgery, chemo, and radiation, Tom's doctors were hopeful for a positive outcome. They had caught the cancer relatively early, the surgery had gone as well as one could hope, and his margins were clean post chemo/radiation. And yet, months later, Tom found himself fighting for his life once again. When the cancer showed up, for the second time, it came back more aggressive and harsher than it had originally. It manifested itself in Tom, and quickly caught up to him.

He was an incredible friend, a devoted husband, a brother, a coach, and so much more, throughout the years. We work to honor him every single say.

Our team has stepped up to Wage Hope at PurpleStride, the walk to end pancreatic cancer, and will be walking in honor of Tom Bonfonti. Will you help us rewrite the future of this disease by making a donation today?

Every dollar that you donate ensures that the Pancreatic Cancer Action Network can continue working to create better outcomes for pancreatic cancer patients and their families. By donating to our team, you are supporting vital efforts to double pancreatic cancer survival by 2020.

Join my team Donate to Tom