Wage Hope at PurpleStride. The walk to end pancreatic cancer. 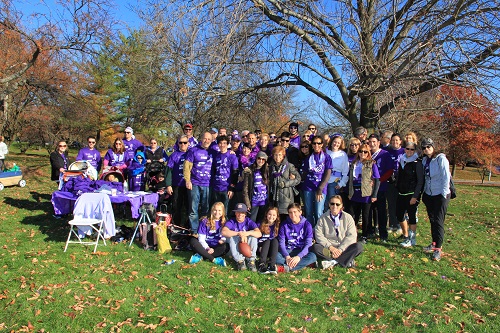 Three years ago, my aunt Jane was diagnosed with pancreatic cancer.

This diagnosis wasn’t just a grim future for my aunt, but for my family, too. The news of a tumor quickly spread from one mouth to another, and friends and family alike were plagued by this terrible news.

It was devastating. How can one come to grips with seeing someone so innocent, and so compassionate, given such an awful sentence?

We quickly learned the answer to this question, however. We many not be able to understand it, but we can fight back.

Since my aunt’s diagnosis three years ago, friends and family have joined hands together in the fight against pancreatic cancer. Under the name of Team Jane, we have refused to accept pancreatic cancer’s survival rate. We have promised to rewrite the future of this disease in honor of Jane. In the Spring of 2014, my aunt underwent a successful Whipple surgery which removed the tumor from her Pancreas. However, in the winter of 2015, a new tumor was found on my aunt's stomach lining. Once again my aunt faced chemotherapy treatment. Fortunately, this tumor was removed this past summer. Recently, a new tumor was found, and Jane is undergoing another round of chemotherapy. Her doctors are optimistic about another positive outcome.

There is a pattern in my aunt’s struggle: she is a fighter. Not once has she let pancreatic cancer get the best of her. Her relentless perseverance and fortitude inspire Team Jane to continue to fight alongside her. And as my aunt battles, we are with her every step of the way.

In my family, we’re a tight-knit group. If someone needs help, we’re always there to lend a helping hand. This isn’t a chore. It’s an opportunity. And now, as my aunt needs help in her battle, not only has my family, but friends too, have come together to support her.

So in her honor, walking side by side with her, we attend PurpleStride walks throughout the U.S., we raise both funds and awareness in her name, and most importantly, we Wage Hope with her.

So come join us. Be a member of Team Jane at a PurpleStride, or donate money to the Pancreatic Cancer Action Network who has the same goal of rewriting the future of pancreatic cancer. Please help in any way you can because we will not stop fighting, and we want you to join us.


View More
Participate in an event 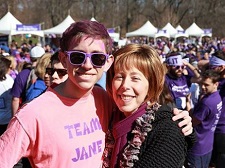