We can’t wait to see you at PanCAN PurpleStride Colorado on Saturday, April 30, 2022.

When they've parked, guests will visit a parking kiosk and select VALIDATION. They will enter the above code and their license plate number. Attendees are responsible for paying the fees upon parking. (There is also a pay by phone option with instructions posted at the parking locations.)

NOTE: To avoid traffic back-ups, participants should access the garage and surface lots using Auraria Parkway & 9th St. Do not use lots on 11th St. and Walnut.

All pancreatic cancer survivors who register for PurpleStride are eligible to receive a special survivor T-shirt and no fundraising minimum is required. 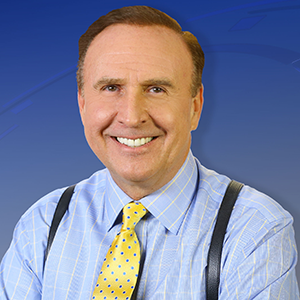 Tony Kovaleski was born in Michigan and grew up in San Jose, California. He graduated from San Jose State University with a degree in Broadcast Journalism. He is a faculty member of the National Center for Courts and Media with the University of Nevada's Reynolds School of Journalism, and is also a member of Investigative Reporters and Editors (IRE), the professional organization for investigative journalists. During his career, he has worked for stations in Eureka, California, Reno, Nevada, Phoenix, Arizona and Houston Texas. Tony joined Denver7 in May 2001, adding experience and tenacity to one of the most respected and honored investigative teams in the nation.

Since arriving in Denver, his award-winning investigations have forced elected leaders to change laws and public policy in Colorado and nationwide, forced disreputable companies to close their doors, and have lead to criminal convictions. His tenacity has pushed politicians to answer questions they would prefer to ignore and it has helped to cement the Contact7 Investigators reputation as a team that can be trusted to hold people accountable.

In 2009, Kovaleski's investigative documentary '33 Minutes to 34 Right' changed the way emergency ambulances respond to crisis situations at Denver International Airport including a full-time ambulance stationed at DIA, something that had not existed since the airport opened. The documentary chronicled, minute-by-minute, Denver's ambulance response to the crash of Continental Flight 1404 on Dec. 20, 2008. More than 100 people were on the 737 when it slid from Runway 34 Right and burst into flames. It took the first ambulance 33 minutes to arrive at the crash site, causing Denver's mayor to call for immediate change in emergency response policies and procedures of the city's largest hospital. This followed a series of reports by Kovaleski that aired months before the crash and exposed flaws and delays in the emergency ambulance response to DIA. Those delays ultimately cost one man his life.

Just three months after the documentary aired, a Denver paramedic called Denver7 and said the presence of a full-time ambulance at DIA had already saved at least six lives.

'33 Minutes to 34 Right' was honored with four national awards for journalism including the Sigma Delta Chi, Edward R. Murrow, National Headliner Award, and the duPont-Columbia Award – the highest award in television journalism and bestowed by the same organization that awards the Pulitzer Prize.

Kovaleski's source-driven reporting has allowed the Contact7 Investigators to break significant key information on several major Denver-area stories including the hunt for the killer of Denver Broncos player Darrent Williams, critical failures with Denver's 911 system, and the death of 24-year-old Emily Rice while in Denver's jail. Kovaleski discovered there was 64 seconds of surveillance video that could have helped explain her death, but had mysteriously vanished from the city's recording system.

The Contact7 Investigators expertly use a variety of tools to gather information including sources throughout Colorado, intense database analysis and the most advanced hidden cameras of any Denver television station.

In November 2002, Kovaleski used hidden cameras to chronicle judges playing golf, hiking, biking and visiting the day spa, instead of attending the taxpayer funded conference. The series of reports also exposed two veteran judges falsely submitting affidavits to the state's highest court claiming they spent time in classes they never attended. Following the reports, the two judges resigned their positions on the bench.

In 2006, a hidden camera report by Kovaleski showed how felons, including those who had served time for fraud and other financial crimes, were allowed to operate in Colorado as mortgage brokers. Soon after the report aired, the state legislature changed the law forcing mortgage brokers in Colorado to undergo background checks and to be licensed.

Hidden cameras were also rolling in 2007 when the Contact7 Investigative team discovered mismanagement at the Colorado Humane Society. Kovaleskis report uncovered the misappropriation of donations to the shelter as well as managers discarding euthanized pets in a Dumpster instead of having them cremated as the pets owners were promised. The management was forced out and the name Colorado Humane Society has been turned over to a new organization.

Kovaleski has also used hidden cameras to show the state-appointed board members of Pinnacol Assurance on a lavish junket to the Pebble Beach resort in California, showed how a Colorado Medical Marijuana certificate could be obtained with just an earache and $50, and exposed a Denver towing company taking cars illegally.

In 2006, Kovaleski's investigation into the Federal Air Marshal Service exposed a series of major nationwide system failures. An unprecedented 17 current and former Air Marshals in four states spoke on camera to the Contact7 Investigators. They shared and exposed a series of critical public safety failures inside the Federal Air Marshal Service. These security breakdowns exposed a significant waste in federal tax dollars, placing the flying public in danger on a daily basis.

In 2009, when a man from Aurora planned to bomb subway trains in New York City, Kovaleski followed the case from the very beginning and he broke significant new details almost daily. Kovaleskis reporting ultimately earned the trust of Denvers FBI, the agency that broke the case and arrested Najibullah Zazi.

The FBI's incredible work was detailed in a documentary produced by Kovaleski and the Contact7 Investigative team titled, The Colorado Terrorist: Inside the Case of Najibullah Zazi. The documentary showed how the local FBI responded to, what they called, the most significant terrorist threat since 9/11.

While with Denver7, Kovaleski has traveled the country covering some of the nations biggest stories. He was the only Denver television journalist to report from New York City after the attacks on the World Trade Center on Sept. 11, 2001. For nearly two weeks, he provided Denver viewers up-close and exclusive reports on the aftermath of the 9/11 attack. In 2005, Kovaleski traveled to Biloxi, Mississippi, and reported on the devastation of Hurricane Katrina. Later that year, he was in East Texas, reporting on the impact of Hurricane Rita.

His work over more than two decades has been honored with numerous awards for journalism including the duPont-Columbia, Edward R. Murrow, Sigma Delta Chi and National Headliner award. His 24 Emmy Awards (and counting!) include recognition for writing, investigative reporting, live reporting and journalistic enterprise. In 2004 and 2006, the Colorado Broadcasters Association named Kovaleski the state's Best Specialty Reporter. In 1997, the Texas Associated Press named Kovaleski that state's "Reporter of the Year." and he has been honored several times since by the Associated Press and the Radio Television Digital News Association. His reporting and investigations have been featured on CNN, ABC's Good Morning America, ABC's "20/20" and CNN's "Larry King Live."

We’re excited to have you join our national PanCAN PurpleStride movement by participating in your local community! From all of us in the Colorado Affiliate and at the Pancreatic Cancer Action Network, we THANK YOU for making PurpleStride a special one.

Join the Colorado Affiliate Facebook Group to connect with your local community, share ideas and get the latest updates!