We can’t wait to see you at PanCAN PurpleStride Las Vegas on Saturday, April 30, 2022.

Parking is available at the West Parking Garage adjacent to the event village site.

Everyone who registered and raised or made a personal donation of $50 or more by April 10 will receive a PanCAN PurpleStride T⁠-⁠shirt! Those who raised $50 by April 10 can pick up their T⁠-⁠shirts on Friday, April 29 at The Green at Town Square Las Vegas from 3:00 p.m. - 7:00 p.m. or on Saturday, April 30 at the T⁠-⁠shirt Tent in the event village.

All pancreatic cancer survivors who register for PurpleStride are eligible to receive a special survivor T⁠-⁠shirt and no fundraising minimum is required. 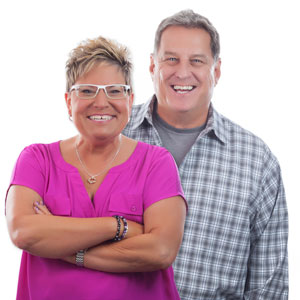 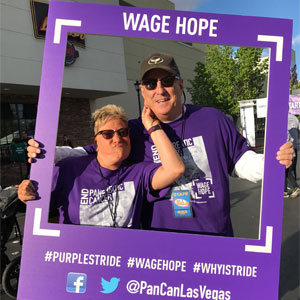 Carla Rea
Along with being co-host of the top rated KKLZ Morning Show in Las Vegas, Carla Rea is an accomplished comedian. She’s enjoyed 30 years of Comedy, Radio, and TV experience. She’s been seen on Late Night with Conan O’Brien, Showtime and Comedy Central. She’s worked Comedy Clubs throughout the U.S. including The Improv, Catch a Rising Star, The Comedy Store, and regularly hosts and performs at major corporate events for companies such as Shell Oil, Pfizer, and Merck, just to name a few. She released her first comedy album, "Finding the Funny” in 2014, and hopes to do a second album very soon.

Las Vegas knows Carla from The Carla Rea Show on Hot Talk 105.1 Las Vegas, and 97.1 The Point, Morning show, with Mike O’Brian. Carla was a light feature reporter on Wake Up With The Wagner’s on KVBC/KSNV, Channel 3, NBC, Las Vegas and she is also a member of the Nevada Broadcaster’s Hall of Fame. Carla, along with her long time radio partner, Mike O’Brian, have won multiple Electronic Media Awards for Best Morning Show in Las Vegas.

Carla Rea works comedy clubs in Las Vegas, and throughout the country.


Mike O'Brian
At one time he thought about being a history teacher, but over 35 years later, Mike O’Brian is still on the radio waking up Las Vegas! Being the longest running “morning man” in Las Vegas, Born and raised in Northwest Indiana, just outside of Chicago, Mike is committed to the Las Vegas lifestyle and weather with flip-flops and shorts year round! Mike enjoys the outdoors with a nice bike ride, reuniting with his band, “The Wedge Brothers” for a few songs, loves sports and a huge Vegas Golden Knights’ fan! Not afraid to admit he loves “musicals”, Mike is married with 2 daughters, enjoys time with his two grandsons and granddaughter, and has an amazing extended family.

Kendra Daniels has received the award for Top 100 Most Influential Women of Las Vegas 4 years in a row! As National Director and the first Miss Fabulous Las Vegas, Kendra has enjoyed participating and performing at many events in support of her community.

Kendra is the lead singer in the Sin City production show on Fremont Street where she stunts and sings at the same time. She was deemed a “One In Million Act” on season 13 of America's Got Talent. Kendra’s single, “Damn I’m Good,” reached number 73 on the media charts. Her band “The Kendra Daniels Band” is full of variety and has performed all over the Las Vegas strip. Make sure to check out her rising fairytale escape sensations; this year marks her two year anniversary opening her family-owned business, “Once Upon an Escape” and her newest adventure, “Once Upon a Nail Salon”

We’re excited to have you join our national PanCAN PurpleStride movement by participating in your local community! From all of us in the Nevada Affiliate and at the Pancreatic Cancer Action Network, we THANK YOU for making PurpleStride a special one.

Join the Nevada Affiliate Facebook Group to connect with your local community, share ideas and get the latest updates!