We can’t wait to see you at PanCAN PurpleStride Rhode Island on Saturday, April 30, 2022.

Free participant parking is available in the fields to the north of the Event Village. Park Rangers will be onsite to help direct participants to the parking areas.

Everyone who registered and raised or made a personal donation of $50 or more by April 10 will receive a PanCAN PurpleStride T-shirt! Those who raised $50 by April 10 can pick up their T-shirts on Friday, April 29 at Goddard Memorial Park from 2:00 p.m. to 6:00 p.m. or on Saturday, April 30 at the T‑shirt Tent in the event village. Please RSVP here to pick up your T-shirt prior to event day.

All pancreatic cancer survivors who register for PurpleStride are eligible to receive a special survivor T-shirt and no fundraising minimum is required. 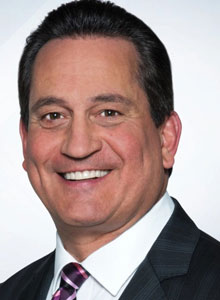 A Woonsocket native, Mike is a graduate of La Salle Academy and Rhode Island College. He has been a broadcast journalist in the Rhode Island and Connecticut markets since 1981.

A multiple Emmy-nominated anchor and reporter, Mike has received more than 40 Community Service and Associated Press Awards. The various awards include the Charles B. Willard Award for professional achievement and the Communications Department Honor Roll Inductee at Rhode Island College, The Lumen Gentium Award for Communications from The Diocese of Providence, The RI Community Food Bank Leadership Award, The Alzheimer’s Media Award, Meeting Street’s Unsung Heroes Award and its “Walter Cryan Award.” Mike is also proud to be part of the Prevent Child Abuse RI organization that under Brendan’s Law helped make Shaken Baby Syndrome a form of child abuse in the first-degree.

Mike was a longtime parishioner at Saint Anthony Church in Woonsocket, serving on the Finance Board, as a Lector, CCD Teacher, Chair of the St. Joseph Feast Dinner Dance, and director of the CYO; he was instrumental in two major capital campaigns for the parish. Currently, Mike is a parishioner at St. Rocco Church in Johnston and is a member of the Holy Name Society and assisted in the Increased Giving Campaign. A member of numerous organizations, Mike belongs to The Italo-American Club of R.I., the Pannese Society of Rhode Island, the Greater Providence YMCA, and The United Commercial Travelers Association. He also served on the board of directors at Saint Rocco School in Johnston, Prevent Child Abuse Rhode Island, The Diabetes Foundation of Rhode Island, The Futures Committee and The Strategic Plan Steering Committee at La Salle Academy.

As a member of the media, Mike has covered many big stories, including anchoring live from the Warwick Mall during the Historic Floods of 2010, Hurricanes Gloria and Bob, The 2014 Boston Marathon, local elections, the 2004 World Series, and the Patriots’ 2005 Super Bowl win in Jacksonville. He also reported live from Pope Benedict’s visit to New York in 2008 and Pope Francis’s visit to Philadelphia in 2015.

Mike is an instructor at Bryant University and is the technical advisor to the school’s radio station WJMF. He also taught at New England Institute of Technology.

Mike is married and has two daughters. He enjoys spending time with his family, gardening and making homemade wine.

We’re excited to have you join our national PanCAN PurpleStride movement by participating in your local community! From all of us in the Rhode Island Affiliate and at the Pancreatic Cancer Action Network, we THANK YOU for making PurpleStride a special one.

Join the Rhode Island Affiliate Facebook Group to connect with your local community, share ideas and get the latest updates!